Yep, I did it! I officially started my job. As an intern at an art gallery. In Paris. IN FRENCH. 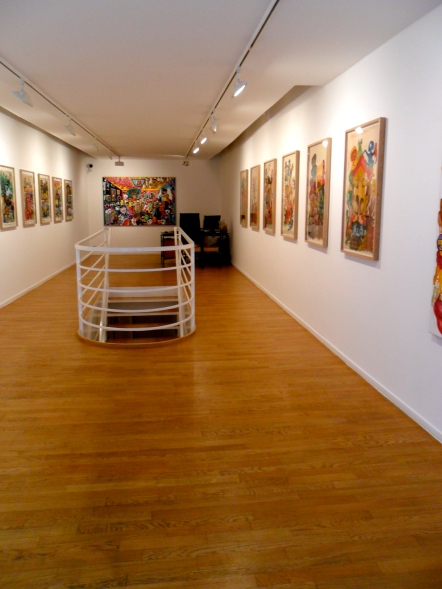 I had basically no idea what to expect at first, despite having been to the gallery already to meet Charlotte (my maître de stage) already for my interview. Turns out, they’re in the middle of taking down the current exhibition (called an exPOsition in French…gets confusing) and putting up a new one that opens on Wednesday, June 5! I spent a lot of this day following around Charlotte and Emmanuelle, trying to understand what they were saying, mostly communicating through awkward sign language.

One of my U.Va teachers, Kate, has pointed out to me something I believe she calls “an epidemic” among students, and people in general. It is: The Bobbing Nod of Approbation. It’s the phenomenon where one finds oneself nodding along to the speaker, whether or not they are asking a question, merely to show support and that you are listening. We all do it fairly habitually. Think about it. Well, let me tell you…my own BNoA is RAMPANT here. Usually accompanied by a timid “oui….d’accord” and not actually having a clue of what someone said to me. I have really noticed though, even in the short time I’ve been working, that I’m starting to feel a lot more comfortable asking questions and telling them when I don’t understand something. One of my main goals was to be more comfortable speaking without being afraid to make mistakes, so I’m glad to already feel like I’m making some progress!

The first day was spent mostly taking pieces from the old exhibit down and wrapping them up in bubble wrap (or as I learned, emballer dans le film!) I’m basically an emballer-ing pro now. Later in the week, I learned how to deballer (can you figure that one out folks?!) when the pieces for the new exhibit came in. I also learned the word for step-ladder: escabeau. I can already tell that particular word is going to be extremely useful to know in my life…

The new exhibit is called Fabien Verschaere: “The Novel of the Shegué King” Fabien is a French artist with a really distinctive style that is very unique and special. Apparently he’s influenced a lot by popular music/culture and fairy tales.

These are all photos taken from his facebook page. Check it out:

Other things I’ve done at work:

Overall, it’s been fun so far and I’m really looking forward to the exhibition opening (le vernissage!) and seeing what other things they’ll have me do! It’s a small workplace, so I’m hoping to get to know all the people who work there pretty well and hopefully become more and more comfortable speaking with them in complete sentences…

In other extracurricular activities this week:

On Tuesday, we had our weekly host family dinner, which was lots of fun as always. The menu offerings were much less ambitious tonight: we started with a green soup that I think was asparagus, then we had ham, potatoes, spinach…nothing to exciting, but still nice to have someone cook for you. Once again, the topic of the Manif’ Pour Tous (opposition to gay marriage laws) came up, but this time Marie-Laurence turned the tables on us and asked if tons of people protested a law in the U.S. what would happen? Would the government take it back? …This basically stumped Steph and me. Forget knowing the answer at all….I also had to tell them in French. Well, I ended up saying (after a long awkward pause) something along the lines of, “Well…in America…we only have two political parties who are really really really opposed. So controversial laws are just never passed. It’s very very slow.” Which 1) didn’t really answer the question and 2) probably didn’t tell them anything they didn’t already know. Oh well. It got me to thinking though, are there any recent examples like this? The most recent I can think of are the Civil Rights Movement and the March for Life after Roe v. Wade, neither of which  even occurred during my lifetime. On reflection though, I think another huge differing factor is that the U.S. is so much larger than France, and most laws that are passed happen at the state and local levels and therefore only affect a small plurality of the entire population. I guess the most recently opposed Federal law was the ACA health care bill, and even though people disliked that, they aren’t taking to the streets in millions against it. Anyway, it’s interesting how much being in a foreign country makes you think more deeply about your own.

On Wednesday, I didn’t have to go into work because they were spending most of the day out of the gallery transporting the works and so wouldn’t really have anything for me to do. I took advantage of the beautiful weather (which has been rather scarce since my arrival!) to return to the Basilique de Sacre Cœur and see the beautiful vista from the top of Montmartre. Three words on this: SO. MANY. STAIRS. After climbing at least 200 just to reach the church, I then ascended 300 more to get to the top of the bell tower. Totally worth it though. Check it out: 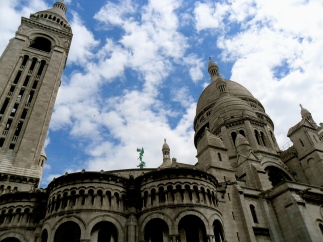 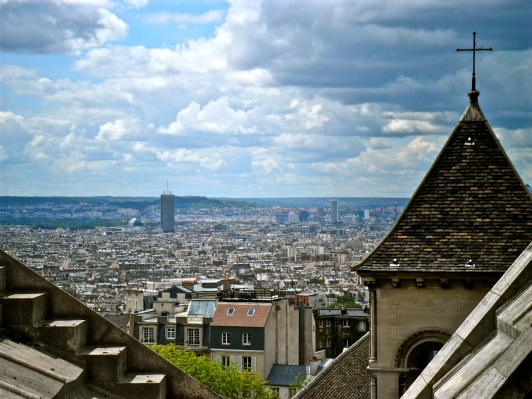 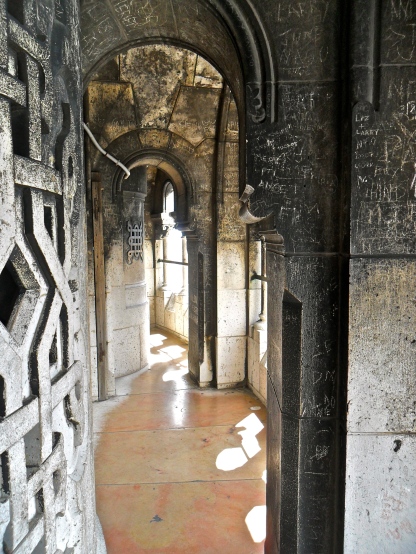 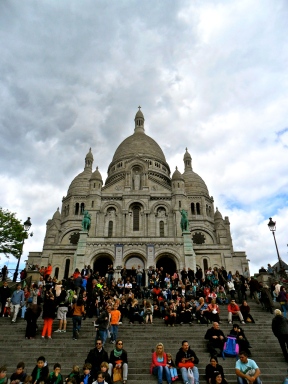 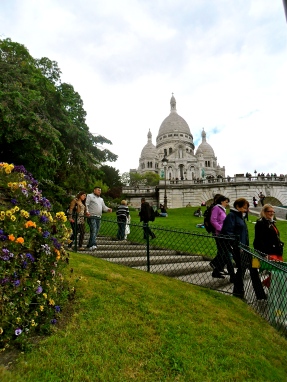 I also toured the surrounding neighborhood, including a stop at the Musée de Montmartre. This museum is housed in the oldest house in Montmartre which also happens to be connected to an artist’s studio that Claude Monet used to share with friend Auguste Renoir and others….nbd. 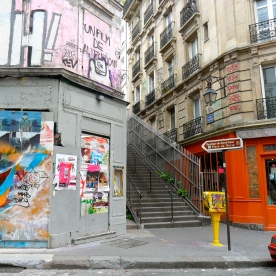 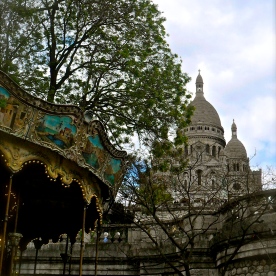 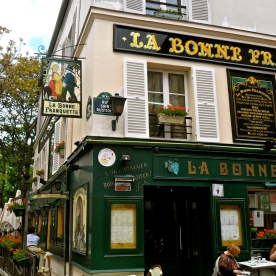 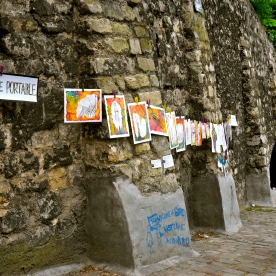 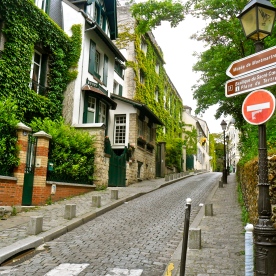 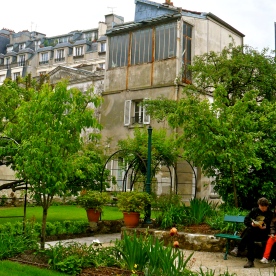 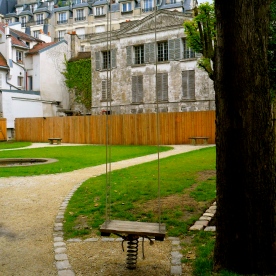 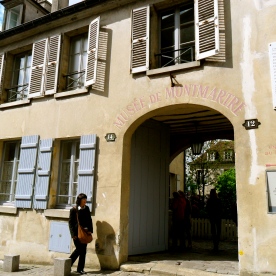 Thursday night we had a night of gastronomy at the BU center, where Elisabeth and the TAs shared with us several specialties from all around France! Some highlights:

Friday night, we went with our class to a cabaret/concert of Serge Gainsbourg. It was fun…though only really rewarding when they sang songs that we had studied in class. So much of his genius is the word play in the lyrics…pretty impossible to understand when you don’t speak the language. The performers did a great job though. All in all a good evening.

Long story short: I’m really excited for the next 6 weeks of internship…it feels like it’s going by so quickly, and yet there’s still SO MUCH to do!!! And I’m almost caught up with my blogging!! Success!