Moving right along to last weekend!!!

Saturday was the birthday of one of my good friends in the program: LANA!!! We planned a day of picnic-ing (or as the French say: faire un pique-nique) in the park that happens to be just behind the apartment Steph and I live in: Parc André Citroën. Yep, like the car. Evidently, this park was built on the former site of a car factory. We wanted to go because during dinner one night, our host family told us that there’s a giant hot air balloon that you go up in! Obviously that needed to happen. So, a group met Steph and I outside our apartment and we left in search of lunch and the park!

Along the way, we discovered a bunch of small grocery stores, shops, boulangeries within a 4 minute walk…aka things we should probably know exist so close to us. The park is really funky and modern–sort of like a post-modern version of the traditional French Le Nôtre style garden. There seemed to be a TON of water elements everywhere that weren’t turned on. Maybe coming back in June or July will yield more fruitful results in that respect. Along with two greenhouses, and a big moat-like element…sure enough there was a GIANT round balloon in the middle of the lawn. 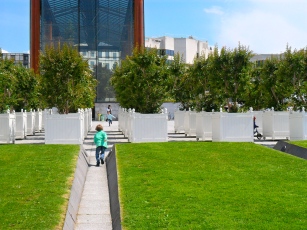 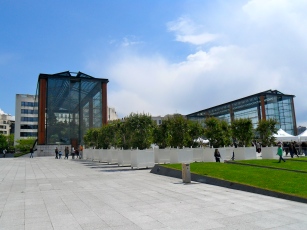 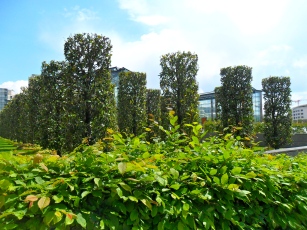 Sadly, the balloon was closed because of too much wind at altitude. We still had a lovely picnic and then went to explore the rest of the park! Turn out it extends way beyond the big open lawn area into several smaller, enclosed gardens. According to Wikipedia, each garden is associated with a metal, a planet, a day of the week, a state of the water, and a sense….well isn’t that lovely. 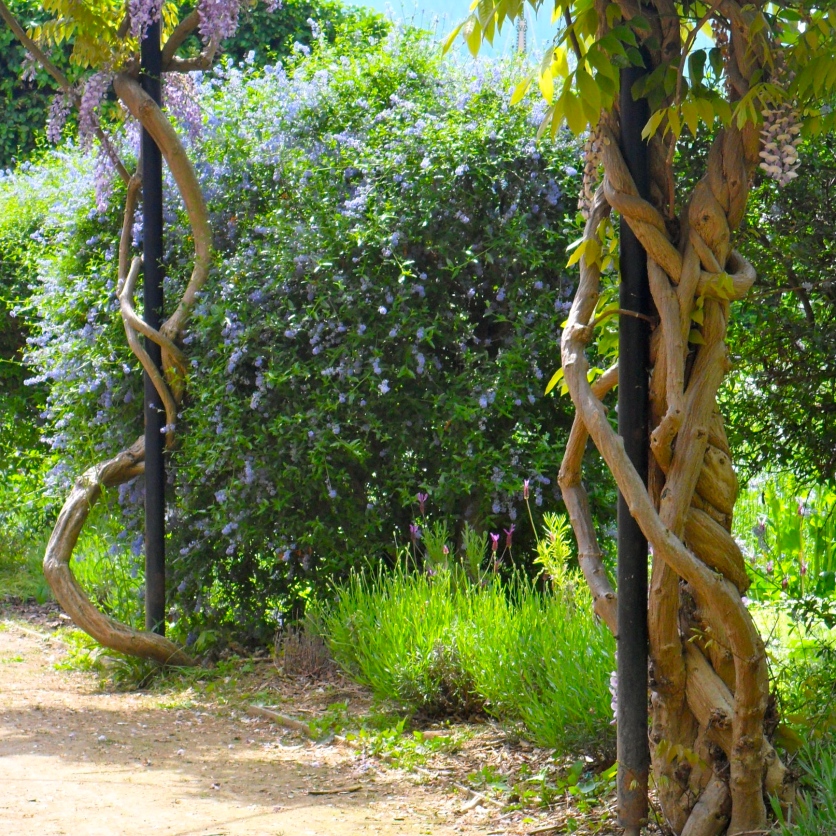 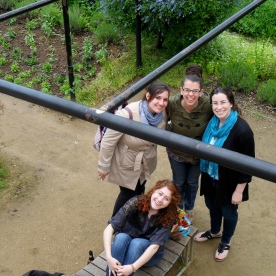 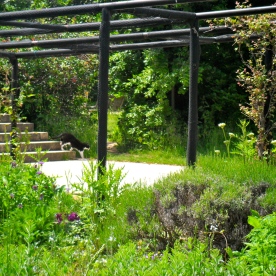 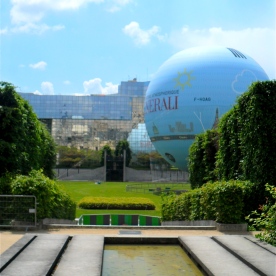 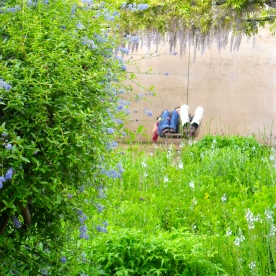 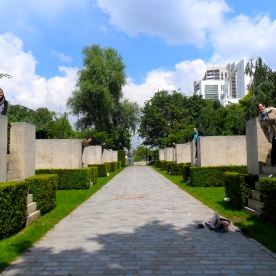 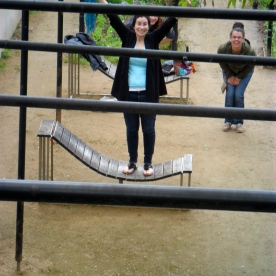 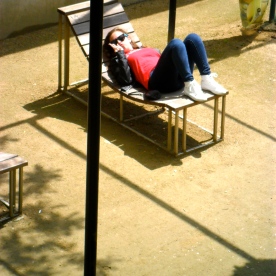 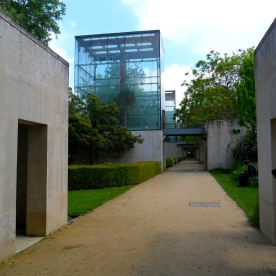 At any rate, a lot of plants were in bloom and it was a beautiful day to spend outside. For about 2 hours. Then: 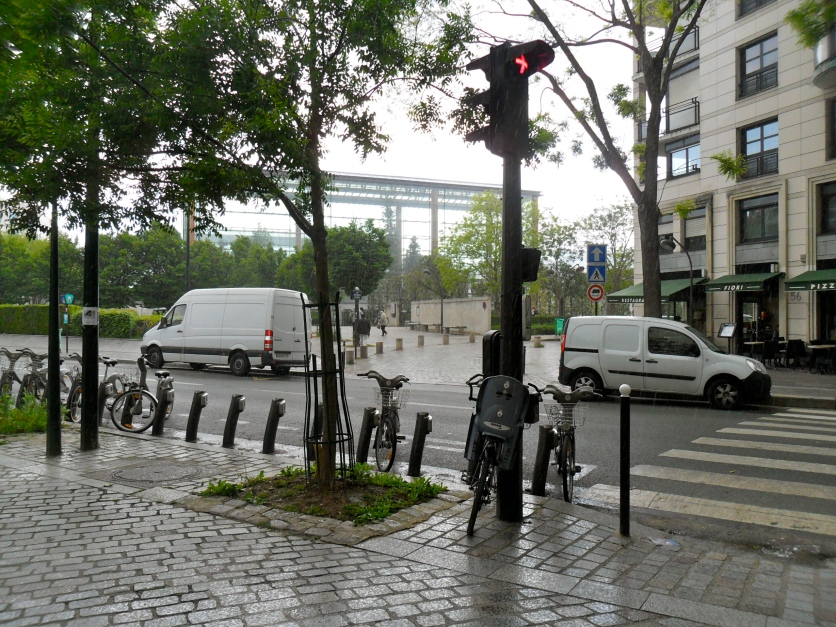 Yep. Started raining. Again. Welcome to Paris. As our program director frequently tells us, you don’t come here for the weather! We decided to split up and go back to our respective homes to relax a little and meet back together for dinner! We stopped at the grocery store to pick up some things for the night; The birthday girl is a fan of cider, so we wanted to get her a few bottles to have with dinner. And also to change it up from wine (I guess…). Whereas in America, cider is usually served in beer bottle sized packs, here they serve it in champagne style bottles. Complete with the popping cork and everything! We found a bottle of rosé cider (?!) that was actually incredibly delicious! Later that night, we met at Rebecca’s apartment, which is blocks away from the Eiffel Tower and has the most UNREAL view… How could you get sick of that?! 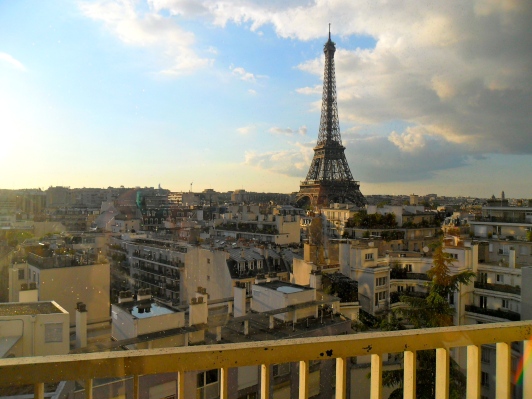 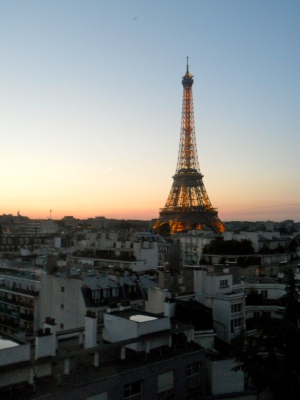 Sunday was a very relaxing, lazy day around the house. Steph and I stayed in, cleaned up the kitchen, did laundry, took out the trash…woo exciting! But, always up for a little adventure, we came up with a very noble project: Figuring out how to properly celebrate Fête des Mères, French Mothers’ Day!

We went out in search of the few ingredients we needed for chocolate chip cookies, because I remembered someone in the family saying they loved cookies, but they’re not that common here, except at bakeries where they can be very expensive. Once out on the street, we quickly remembered that everything is closed on Sundays here. We were about to give up when we passed a tiny corner market that had a shelf with flour, baking soda, applesauce (to substitute for eggs), and chocolate!! I was kind of worried/excited about trying to bake here for a few reasons: 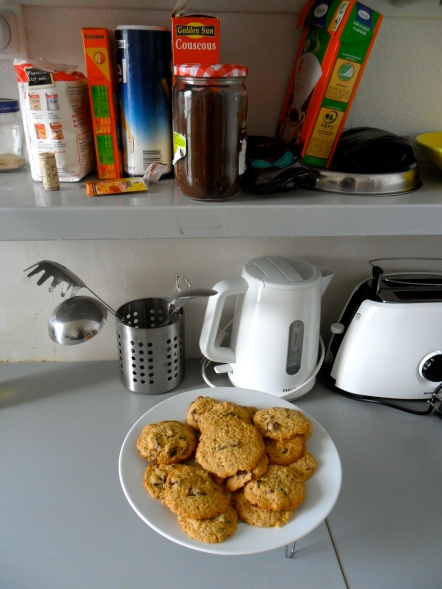 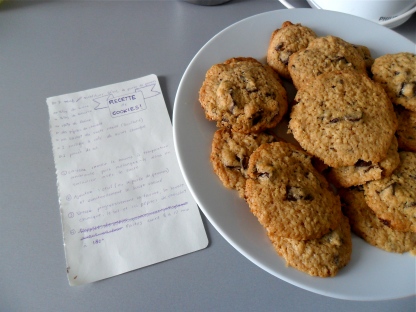 But, we went for it anyway, and the cookies didn’t turn out too badly either!! They were a little lumpy and crumbly, but they tasted like cookies! We gave a big plate to our host mother along with some flowers that the man at the shop put a “Bon Fête Mamans!” sticker on for us!  She was so happy! She told us all her actual children had forgotten, and then proceeded to quiz Marie-Laurence and Jean-Baptiste when they came home, “Aujourd’hui c’est la jour de Quoi?!?!?!”

While we ate the cookies, she told us about what she and her husband had done all day…March in the “Manif’ pour tous” the massive protest march against the gay marriage law. She showed us the map, huge groups left from three different points all over Paris and converged at the Invalides. She told us it was one of the biggest demonstrations she’s ever seen. It’s really hard to describe the politics in your own language, forget trying to understand it another (more on that later….) so I still don’t have a clear picture of exactly what is happening. Sounds like people across the board are very unhappy with Monsieur Hollande (they seem to refer to all their politicians here as Monsieur and Madame. I can’t tell if it’s respectful or sarcastic…but I think it’s funny). Our host mother seems to be very concerned that “IL N’Y A PAS DE DÉMOCRATIE EN FRANCE MAINTENANT” 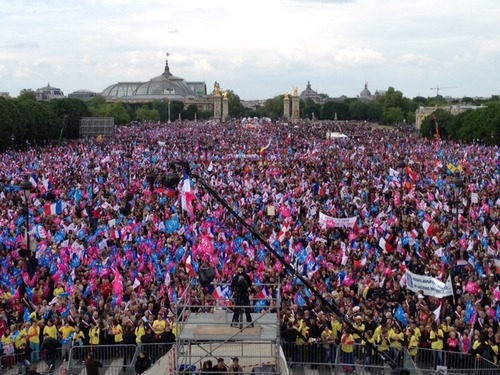 The crowd at the Invalides

Her solution that evening though, was to make crêpes. In fact, I believe the conversation went something like this:

After a few crêpes, Steph and I decided that we should maybe leave the house at least once today (not including our grocery adventure, I guess) and since it was such a beautiful evening, we decided to take the short trip back to La Tour Montparnasse to actually go up and see the sunset. That turned out to basically be the best idea ever. I think these pictures will probably tell you why. 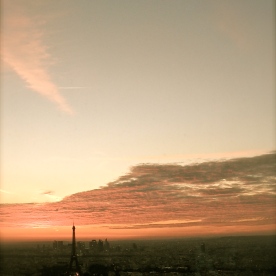 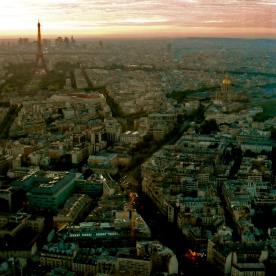 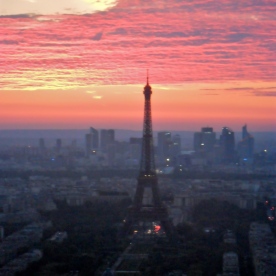 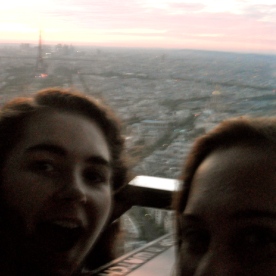 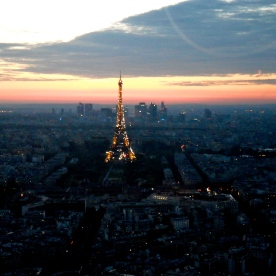 Many people started their internships on Monday. Lucky for me, I had a three-day weekend, as most galleries in France are open Tues-Saturday. I took this extra day to do some solo sight-seeing and went down to the Notre Dame to explore and wander. Sadly, I forgot my camera, so no stained-glass window pictures, but I’m hoping to go back and get to climb the bell tower and see the crypt! The whole cathedral seemed so much smaller than I was imagining it would be. Maybe because of the hoards of tourists, the constructed tents that were set up for the anniversary celebration….it just seemed like a regular-sized big church to me. I’m not saying it was any less magnificent for it, just that when Quasimodo does this in the movie:

he would be clearly visible from the streets…

Walking around the banks of the Ile de la Cité (the small island on which Notre Dame is situated) there were tons of booksellers set up at semi-permanent stands, and I even found the legendary Shakespeare and Co. bookstore completely on accident! I continued wandering and ended up in the church of St. Severin, which was much smaller than the Notre Dame (obviously) but had some beautiful stained glass windows that reminded me of a Van Gogh painting. Wandering through crowded streets packed with people, cars, and more take away crêpe and mediterranean food windows than I could count, I stumbled upon the cinema that we had been to with class earlier last week! And the Théatre de la Huchette, a theatre that has been playing the same productions of The Bald Soprano and The Lesson by Eugene Ionesco since 1957!

Then, I walked to the Jardin de Luxembourg (WHAT A DAY TO FORGET MY CAMERA!) and met some friends for dinner and went home to get mentally prepared for the FIRST DAY of my internshippppp!!!