Helloooo again! Me voilà! I’ve been back in Marseille for exactly 2 months (as of yesterday), and have like 6 blog posts on my back burner, but can’t seem to get any of them finished. So I’m putting out this little snapshot update, in the hopes that it will jumpstart my blogging again!

Lots has happened in the past 2 months, but also not much has happened at all… I found a new (French!) roommate, I met new assistants, I caught up with old friends and colleagues, I started back at school and then immediately went on two weeks of vacation, I went to a concert, I bought theatre tickets, I went hiking, I rode a city bike, I went to the beach – a lot, I started two puzzles, I drank tea and pastis and wine and lemonade, I finished one of the puzzles, I bought seven plants…. The list goes on. So here are some highlights and lowlights: 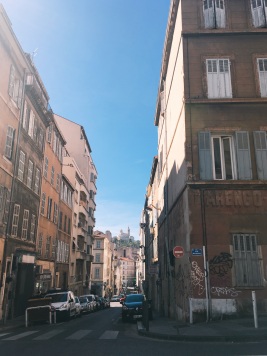 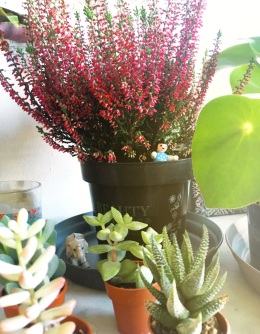 I’d say on the whole, these two months have been full of many more highs than lows, from casual evenings with friends on the beach, to quiet afternoons drinking tea and doing a puzzle with my roommate, to singing head, shoulders, knees and toes with my students, I’m constantly reminded how much I like living here! Getting back into the swing of teaching with my colleagues has also been wonderful. They are about 80% of the reason I wanted to return for a third year, and they are still as supportive and fun as ever!

I do have a couple of lows…I don’t want to make a big deal about them because I truly believe that things can always be worse, and it’s a big part of my nature to roll with the punches and move on from things I can’t change. But last month I was the victim of a scam…!! Woohoo yep, that thing everyone tells you to protect yourself from and that you think could never possibly happen to you because you’re too smart, too vigilant, too wary — yeah, it happened to me. 👍👍

Basically, a guy contacted me via one of the handful of internet ads I have online advertising my services as an English tutor/translator asking me to translate some documents for him. I sent him an estimate and we agreed on a price. He sent me the first document, I got to work, he sent me a check for a second document. He told me, actually the second document isn’t ready yet, can you reimburse me for that second document? Seemed logical, so I did. The check he’d sent me bounced. I lost 500€ and a little faith in humanity, and a little dignity. It sucked. I went to the police and filed a report — in French. It was stressful. My friends were the best and woke up at 8am on a Saturday of vacation to go with me. Most importantly I am fine, it’s only money, and life continues to go on, much more positively !!

My new roommate, Pauline and I have discovered a shared passion for hummus. #Blessed with Pauline’s food processor we have become homemade hummus maniacs. Her friends won’t let her come to a party if she doesn’t bring hummus. So far, we have made plain hummus, roasted red pepper hummus, beet hummus, and curry hummus. Next, we want to try carrot or sweet potato hummus or roasted garlic hummus! What hummus combinations do you recommend?! 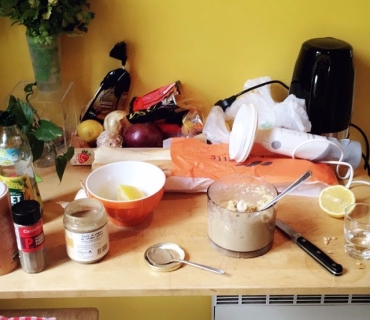 In related news, I learned that in French, the word houmous does NOT form a liaison in the way that hôpital does. In fact, I’ve been learning that A LOT of words beginning with H that I assumed made liaisons, actually DON’T 😱

L’hôpital and les‿hommes. But le houmous or des haricots. Also, it’s not en‿haut, but en haut, which I have been saying incorrectly for about 6 years now. I guess that’s what I get for never taking French phonetics classes…

For the past few weeks, I’ve been rereading The Handmaid’s Tale for the first time since initially reading it in high school, and since watching the first season of the (excellent) Hulu series. I’m really enjoying how poetic yet accessible the language is. It is, of course, a devastating story, but one I think everyone should read. I also have a greater appreciation for how well the series reflects the book, in both content and tone, and it’s making me very curious to see how the series will continue!

There’s a long queue on my kindle, but up next I’ll probably attack either Hidden Figures or If We Were Villains.

What I’m listening to

In October, I went to la Fiesta des Suds an annual three day music festival in Marseille. There were maybe a dozen artists playing on a handful of different stages at a really cool indoor/outdoor venue near the docks of Marseille, but the big draw for us was Bigflo & Oli, a really young (they’re 24 and 21 respectively) brother rap duo from Toulouse. I’ve appreciated their music for a while, having randomly discovered them on a Spotify playlist. Their lyrics are really excellent, the tracks have a great musical quality to them, and they rap about subjects from their lives: school, friends, family, becoming an adult, following your dreams. Have a listen: 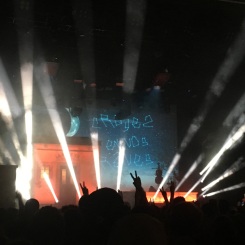 Probably their most well-known song Dommage, was co-written with Stromae and tells the stories of people who should have followed through on their ideas, but didn’t have the courage.

The Rough Translation podcast by NPR had a fantastic first season which I just finished listening to. The premise is to cover international stories that are in conversation with American current events. My favorite episodes were “The Refugee’s Dating Coach” “American Surrogate” and “Om Alone in India”

I’ve been using my vacation to power through FX’s series The Americans on Netflix. Took one look at the description and thought it’d be right up my alley: Russian spies  + the Cold War + FBI drama…. I’m hooked!

Last year, my Costa Rican roommate and I started a post-it note wall with words and expressions in English, Spanish and French. Usually they’re random things that came up in conversations and we didn’t know how to translate. So we wrote them down and looked up equivalents in several other languages. Since my French roommate moved it, the wall has been quickly growing. Here are some recent additions:

There you have it! Hopefully I’ll be back soon with a less whirlwind post… In the meantime, never forget the immortal words of Barty Crouch Jr: CONSTANT VIGILANCE! ❂