As brilliantly put by my good friend Julia:

The pack of Italian friends I have made here are very enthusiastic about teaching me Italian words, and I am more than happy to learn them. I have learned about 15 ways to use the word cazzo (Italian for dick, which is used in at least 50 expressions, to convey any emotion under the sun. I have learned how to say that something is disgusting, in a way that literally means, “it makes me shit” (or the even more vulgar “it makes me shit a dick”. Just one example of the many uses of cazzo!). And there’s the old standby I learned from my dad: Andiamo?!

Unfortunately, very few of these phrases came in handy during our recent trip to Torino, Italy. Being the brilliant planner that I am,  I managed to make a slew of Italian friends and then leave them all behind in France while I travelled to Italy with three anglophones who speak even less Italian than me. 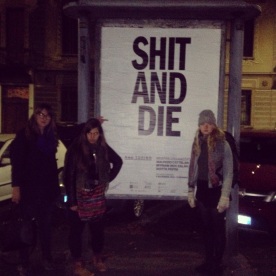 Playing MASH because we are 13.

I will admit, I wasn’t expecting the amount of anxiety I had over the language barrier. I am used to being able to communicate in this foreign country, if not perfectly, at least well enough to get by. But as we descended from the TGV at Porta Susa train station, it slowly dawned on me that I wasn’t even able to play out even the simplest of interactions in Italian, because the likelihood of “Hello, what is your name? My name is Anne” being useful in ordering at a restaurant or hailing a cab were slim to none. Apart from a trip to Spain when I was 7 and a short stay in Puerto Rico last summer, I have never actually been in a country where I don’t speak or understand the language. And so, we had to behave like tourists: speaking slow, disjointed English (or sometimes French), miming everything, requesting English menus at restaurants, reacting with blank stares whenever anyone tried to speak to us.

I think it was this blatant touristy-ness that I was so self-conscious of. As a lover of languages and someone who firmly believes in cultural exchange and relativism, I want to try as much as possible to respect other cultures by at least attempting to speak their language and abide by their customs. I am especially conscious of the stereotypically bad reputation “Ugly American tourists” can have for being loud, rude and americentric (we even blame ourselves for being the worst tourists). We certainly were nowhere near embarrassing, I was just very taken aback by how jarred I was by not having the same facility of communication as I’ve become accustomed to in France.

Hannah along the river 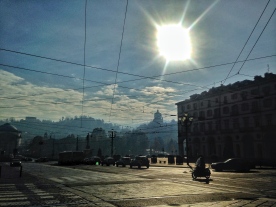 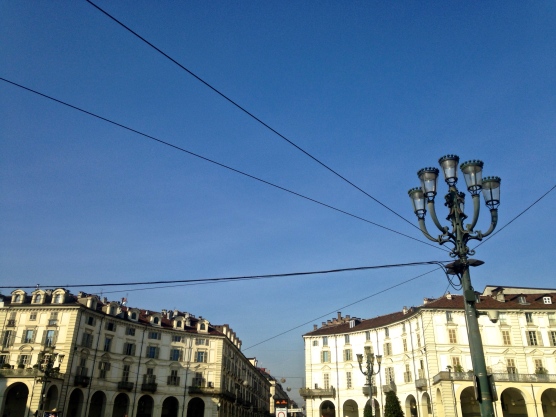 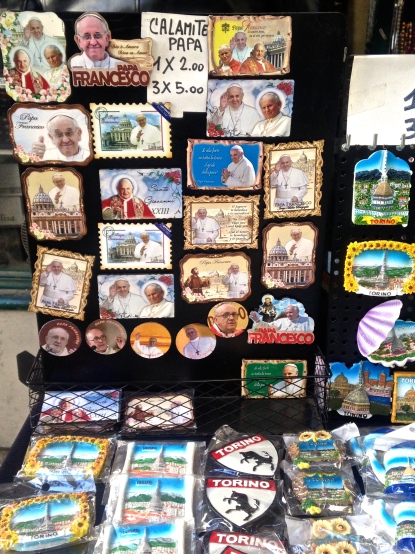 So many Pope magnets 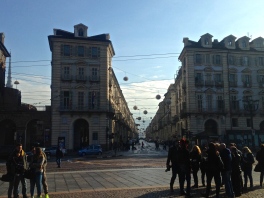 Oddly enough, Torino appeared to be a city more or less void of tourists. Everyone we passed in the streets, everyone in the restaurants were speaking Italian. This made the city feel very “authentic.” The men and women we saw were simply going about their daily lives. The city itself was very beautiful. Its architecture was clearly French-influenced, but at the same time we could tell that we were in a different country (languages aside, of course). I could have spent the entire weekend walking along the River Po and exploring the tiny side streets and the magnificent churches on every corner, but luckily we decided to embrace our tourism and hit the tourist sites. Up first: the National Cinema Museum inside the Mole Antonelliana. 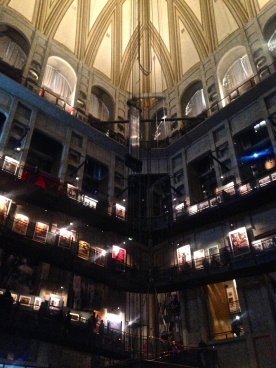 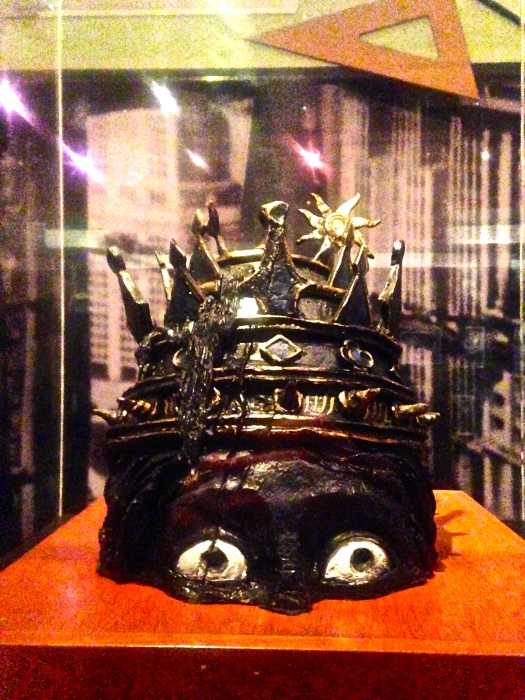 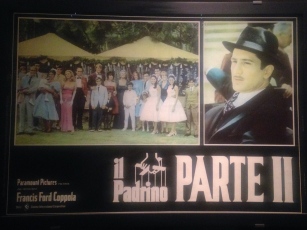 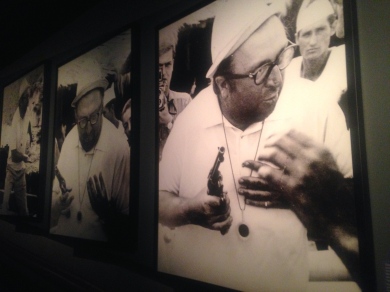 Movie posters all along the wall

In short, this museum was brilliant. Coming from a childhood spent 20 minutes away from some of the nation’s greatest museums (shoutout to the Smithsonian!), I don’t know that have never been to a museum that managed to be so interactive without being kitsch, and that covered so much without being exhausting. We opted not to spend the extra few euros to ride the elevator to the top of the Mole because a) it was a smoggy day and b) the line was at least 16 times as long as just entering the museum. We spent at least 4 hours inside the museum, exploring the fascinating exhibit that detailed the beginnings of cinema, starting with shadow puppetry, spectroscopes and magic lanterns, the very basics of optics and illusion, and eventually graduating all the way to the earliest films of Georges Méliès and the Lumière brothers. It was basically the movie Hugo in museum form!

The rest of museum was centered around the stunning atrium, where multiple screens played clips from all manner of film, and side galleries were referred to as “chapels” devoted to certain eras or genres. The walls of the 500 meter dome were covered in film posters, and there was a special exhibit on Italian film director Sergio Leone, well known in the States for directing what we call spaghetti westerns. 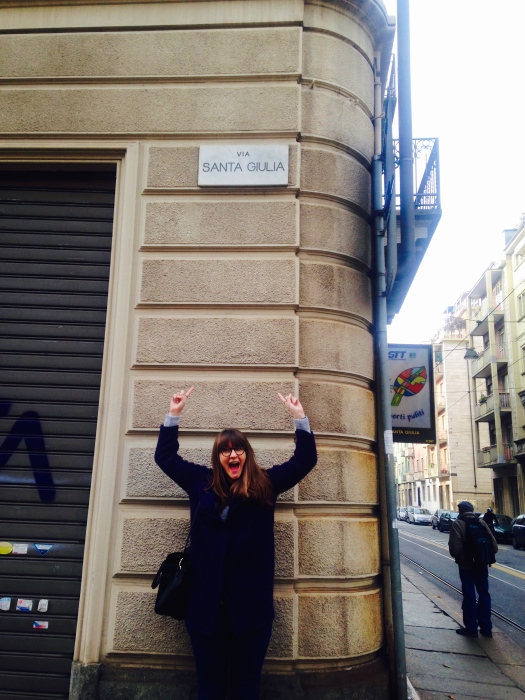 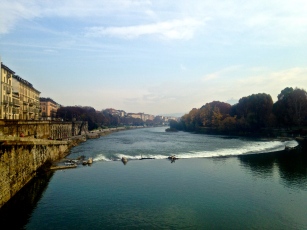 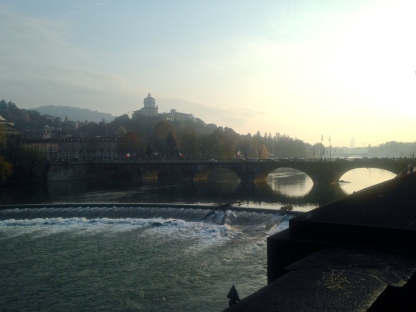 Oh, and speaking of spaghetti. The food we ate in Italy….. here, just look at these pictures that I’ve stolen from my friends because I’m not basic enough to take photos of food yet. 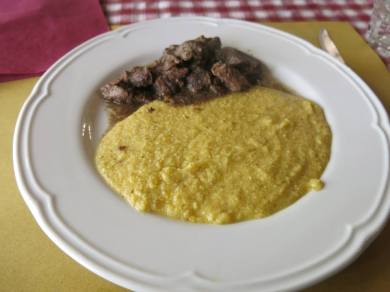 Some kind of meat and polenta

Every kind of meat and a variety of other bizarre things fried. A typical Piemontese dish. 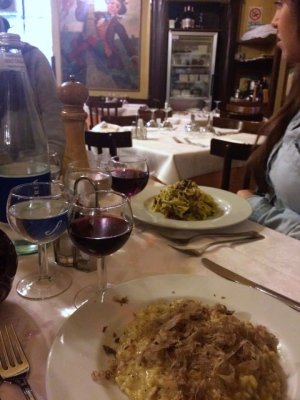 In the end, despite my hesitations over not speaking the language, I loved my first visit to Italy and cannot wait to return! Hopefully in the interim I’ll have my friends teach me some polite phrases to use!  ✽