Okay, so remember how I was going to write every day in November? Turns out I got way sidelined by the shock of election results and a resulting desire to completely detox from the internet and social media, including my team of Cheer Peppers. But I’m back now, fired up and ready to go….more or less.

I hosted an election party at my apartment on Tuesday night. Several assistants don’t work Wednesdays as they are often half days for schools, so the whole gang came out to eat classic American dishes (chili con carne and pb&j) and try to comprehend the American electoral system. By the time polls began to close around 3AM, only a handful of American assistants were left. We bunkered down in blankets in front of my handy laminated U.S. map, streaming MSNBC. First we were nervous. Then the panic began to set in as state after state turned red. By 7AM there were still a handful of states too close to call, no one had officially been declared the winner, and everyone slowly began to drift off as we awaited more news. The word that woke me was concession. I immediately sat up and turned the volume up. And then I cried.

We regrouped. I walked to the market to grab some veggies for brunch. It was raining. I sobbed silently into my knee listening to Hillary’s concession speech. That night, not wanting to leave each other alone, we made chicken noodle soup and grilled cheese sandwiches. Comfort food. 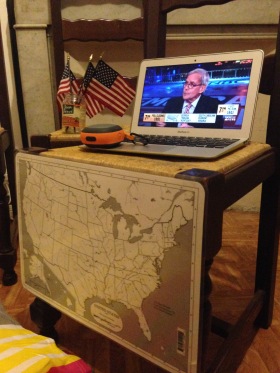 Let’s get right down to what the people want to know: What do the French think of the dawn of Trump’s America??

For the most part, they have actually been really sympathetic. With Marine Le Pen a serious contender for the French presidential election coming up in April, Trump’s victory combined with the shock of Brexit, has made the French more aware than ever of the serious possibility of their very own populist demagogue in the Elysée Palace.

Le Pen is the charismatic leader of the far-right National Front party, which has surged in popularity recently on a platform of increased security (read: anti-muslim xenophobia), economic protectionism (Frexit??), and extreme Nationalism. She has called for an immediate end to reception of migrants, she believes France should crack down on its border patrol, she admires Vladimir Putin, she doesn’t believe in man-made climate change, she believes multiculturalism is ruining France and that globalisation is a form of totalitarianism.  On election night, she congratulated Trump, tweeting, “Félicitations au nouveau président des Etats-Unis Donald Trump et au peuple américain, libre !” “Congratulations to the new President of the United States Donald Trump, and to the American people, free!”

The good news is that France’s political system will most likely bar the National Front from reaching the presidency. They have two rounds of voting to insure that the ultimate winner has won a 51% majority. After the first round, all but the top two candidates are eliminated, leaving the final two to attract and consolidate the remaining voters. If, as is widely predicted, Le Pen faces off with center-right candidate François Fillon in the final round of voting, it is highly likely that an overwhelming majority of left-leaning voters will block Le Pen by voting Fillon in the second round.

Living through this moment in France has been surreal at best and extremely isolating at worst. I’ve had to dodge several awkward questions and have spent a whole lot of time trying to explain the electoral college. It’s certainly highlighted some interesting political parallels between these two countries, as well as some stark differences. And because I actually get this question a lot: I do plan to eventually return to my country!– I’m still proud to be American and want to join the fight for what is right. For now, I’m glad that I am finally starting to clear my head of the nonsense, and get back to reading and writing! ❂