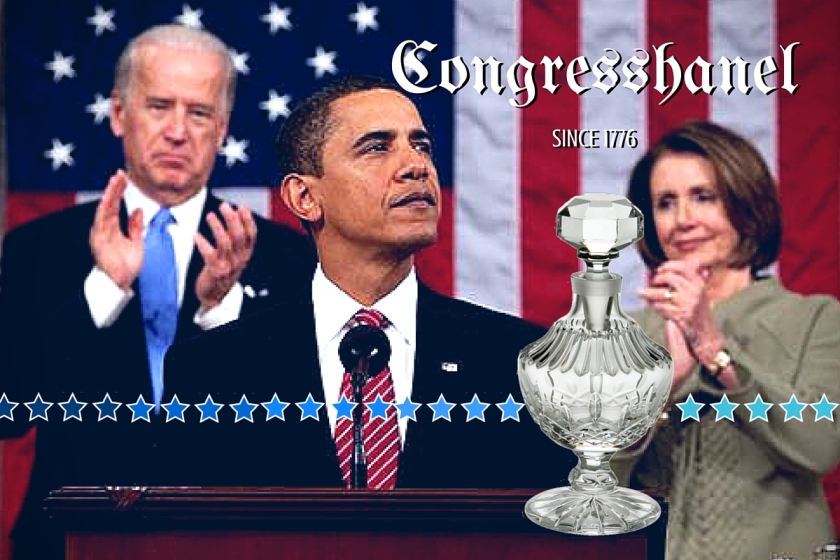 Earlier this week I was going through old saved email drafts, when I stumbled upon something very special from about two years ago that I’d completely forgotten about. It was a page of jokes I wrote for a fake comedy sketch that someone a lot funnier than me should write one day.

The concept is one of those parody advertisements for a new perfume called Congresshanel. Let’s be clear, at no point was there a possibility of this sketch being produced. I’ve never been in a comedy group, nor have I ever written a comedy sketch or even performed with an improv troupe. I just spent about 45 minutes one night writing absurd congressional pun taglines in an email that never got sent to anyone because I thought it was funny.  And since my blog doesn’t have enough government-related humor already, I thought I would share them with you lovely people.

Please feel free to read them in an overly sensual voice à la ridiculously sexualized perfume ads, and make sure you whissssper the last word to get the full effect.

You’ll never be a lame duck when you wear Congresshanel.

The majority votes YAY for Congresshanel.

You can filibuster all night long when you wear Congresshanel.

You’ll be the life of either party in Congresshanel.

The national debt won’t be the only thing rising when you wear Congresshanel.

Even the minimum wage will increase when you wear Congresshanel.

All the ladies on Capitol Hill will want to punch your ballot when you wear Congresshanel.

The even better part is that underneath all this ridiculousness was a list of Congress-related vocabulary, potential ideas I presumably planned to use to write even more jokes later on…

I’m guessing this brilliance isn’t going to be produced any time soon…. File Under: my failed comedy career. ❂