Okay, so technically the title of this post does not rhyme when pronounced correctly, but indulge me for a while because I finally have received more details about where I will be living and working while in France! On Monday, I got my ‘arrêté de nomination’ (my work contract with the French éducation nationale) in the mail! After 20 minutes of being confused by French paperwork, I determined that I will be moving to Chambéry, in the Savoie département!!

If there is one small town in the world where it is possible to taste the gentle way of life in an atmosphere of a pleasant and safe trade, it is Chambéry! -Jean Jacques Rousseau

Chambéry is the capital of the Savoie départment and has a population of around 60,000. It honestly seems kind of similar to Charlottesville in many ways: a university town, surrounded by mountains, old time-y architecture, was once home to a great thinker upon whose writing many foundational texts of America are based (Jean Jacques Rousseau wrote the Declaration of Rights of Man in Chambéry and his residence is now a museum)… 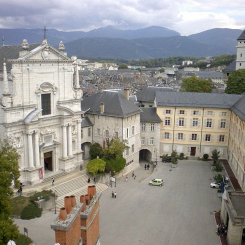 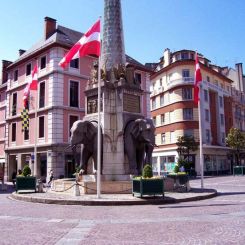 It’s very close to Annecy, Grenoble, Lyon, Geneva, Switzerland and the Italian border, all places I would love to visit. Even though Chambéry may not have been my number 1 choice, I am still very excited. I’m relieved that it seems well-connected by public transportation; one of my biggest fears was being placed in a small mountain town, virtually inaccessible to the rest of France. Since I can’t drive, even renting or borrowing a car wouldn’t be an option. Luckily, Chambéry has a train station with a TGV direct link to Lyon and Paris and even a small little airport!

My arrêté also told me the school I will be working at (or at least one of them…there’s a possibility of splitting my time between two or more schools as well). École Élementaire La Concorde is in the commune of Barberaz, which is just outside of Chambéry. I haven’t found out too much about the school or what classes I’ll be assisting in, but I do know that my students will be 7-11 years old, and that the school is the first in Savoie to become an English Immersion school, meaning they teach 50% of their curriculum in French and the other 50% in English! Here’s the image from Google Street View:

I emailed a ton of people: the principal of the school, the “inspecteur” of the region (roughly equivalent to a superintendant, I guess?), etc. only to realize after copying, pasting, and sending the same email four or five times that I spelled the name of the school wrong….oh well. Now I’m just waiting to hear back from them, which will probably be towards the end of August, since school let out about 2 weeks ago. In the meantime, here are the other things on my To-Do List!

Did I forget anything??