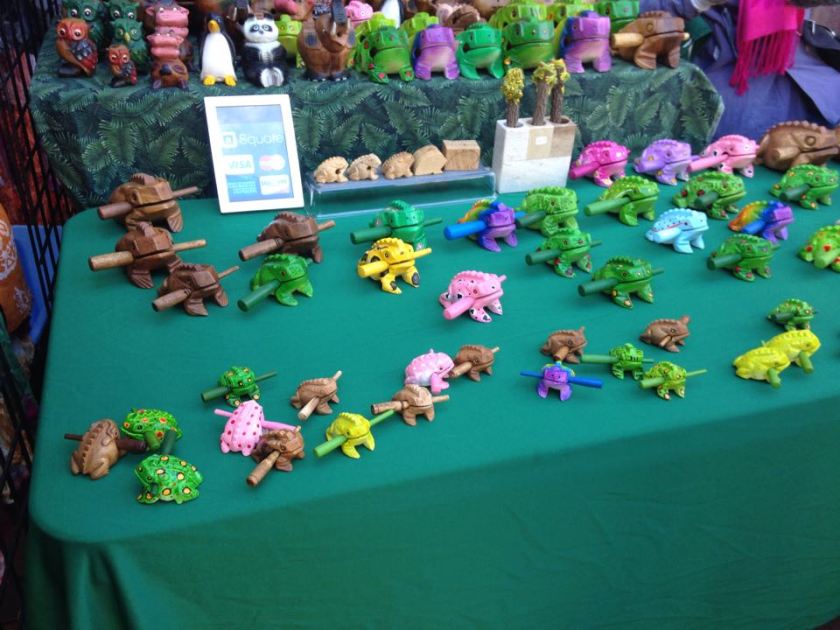 The four of us piled into our Airbnb apartment in Montpellier, France. As my friends began to change into their pajamas and brush their teeth, I examined the bookshelves:

A full set of hardback Harry Potter books; several shelves of paperbacks, their titles written upside-down as is the way with French publishers; a small CD collection and an unplugged stereo; three little wooden frogs, decreasing in size.

I now know these small wooden figures are called Frog Rasps, or güiros, a type of Latin American percussion instrument. But at the time, I just thought they were funny.

Because we are hilarious, Julia and I decided to play a prank on Hannah and Rachel, who were quietly reading in the bed they were sharing in the other room. We waited until it was absolutely. quiet. and then…

“What the hell was that?!” we heard from the other side of the curtain that separated the rooms. We had already dissolved into giggles. Because apparently we are 12. But because we are 12, those little instruments were cause for much laughter and even an impromptu percussion performance of Beyoncé’s greatest hits over the long weekend.

“Anyone know what these things are called?” we kept asking. But none of us did. Eventually, we christened them the gratte-frogs, using the French word for scratch. We kept frog in English because gratte-grenouille, while nicely alliterative, is a bit of a mouthful*. The name stuck.

For Christmas, Hannah gave me my very own gratte-frog she had found at the Christmas market in Chambéry and I left it proudly displayed in the communal living room of our 5-person apartment. One of our roommates was always having loud friends over on weeknights, and though I accepted the constant background noise and random French people coming and going at all hours, it didn’t stop me from padding over to Hannah’s room to complain about it on a regular basis.

I sat on her floor, discussing the strange conversation I had just had with two guys in my kitchen. One of them I think I had met before. The other one had a huge red wine stain on his crisp white dress shirt.

“What the hell was that?!” We looked at each other in surprise.

“They’re playing the gratte-frog!” We dissolved into giggles, just like we had that first night in Montpellier.

From then on, the gratte-frog lived permanently between the living room and the kitchen. He would somehow make his way to wherever people were hanging out. My late-night noisy visitors’ shenanigans would invariably be interrupted with a quiet brrrrrrr-ap! , brrrrrrr-ap! and I would dissolve into giggles, and then press my earplugs in a little bit further, trying to get some sleep. ❂

*If I remember right, our invented name was also partially based on the bizarre translation for rose hip we had encountered that afternoon at the market: gratte-cul, literally scratch-ass…).