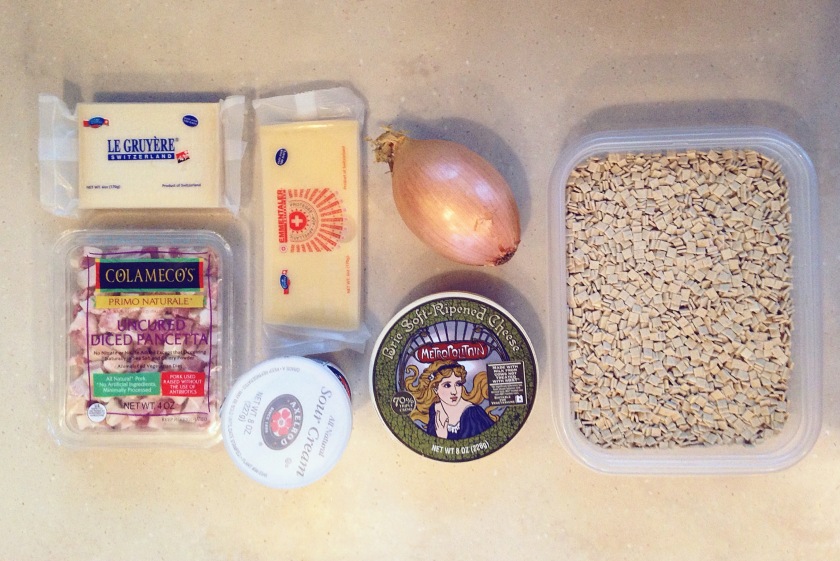 If you are dreaming of ways to add more carbs to your life, then I definitely have the recipe for you!!

Tartiflette is a dish famous across France, but originates in the mountainous Alpine region of Savoie, where I lived. It’s the perfect dish to warm you up after a long day of hitting the ski slopes, or to clog up your arteries in a delicious whirlwind of potato, cream, cheese, and bacon. Really that describes all of the famous dishes from the region, which also include raclette and fondue.

But my personal favorite version of tartiflette is a variation called croziflette, which substitutes the potatoes for a specialty made in Savoie, called the crozet. Crozets are tiny square tiles usually made with buckwheat flour. I like to think of croziflette as Alpine mac & cheese. This dish became our go-to for weekend get togethers, and always served up a week of creamy delicious lunch leftovers!

Being Americans from the country famous for its casseroles, my friends and I often modified our croziflette to include broccoli or peas, a move which made us feel like we wouldn’t die of cheese poisoning but made our French roommates roll their eyes in disdain and horror.

The heart of the dish is the reblochon cheese, a soft raw-milk cheese with a nutty flavor made in Savoie, and unfortunately not available in the U.S. thanks to import rules over raw-milk cheeses. The crozet pasta is also not that widely available throughout France, let alone the States, so if you manage to one day find this dish on a menu, know that you are appreciating a true local delicacy!!

This recipe may not be the most “authentic” but it is our cheap-ingredient, American-style reworking that suits me just fine!!

(as adapted by two Americans and a Brit)