The Christmas season arrived swiftly in France. Although the French are as unaware about Thanksgiving as the rest of the world, they – just like any self-respecting American should – waited until all the parades and football games were over before blasting carols and decorating trees. The Friday night after T-day saw the illumination of hundreds of lights strung through the streets of Chambéry and that weekend the Christmas market opened! 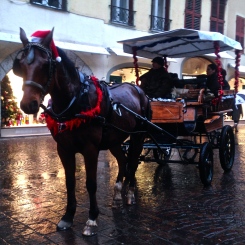 From what I can tell, there is a Christmas market in virtually every single French town of a certain size (I’ve seen them in Chambéry, Lyon, Grenoble and Montpellier), and there are certain elements that make every Christmas market:

And if all of that vin chaud isn’t enough to put you into the Christmas spirit, remember I mentioned the lights?! They are strung charmingly across every street, sparkling red and silver snowflakes. Lights seem to be a big part of the festivities here in France, which we evidenced the first weekend in December during the Lyon Fête des Lumières. This festival of lights is held every year and Wikipedia estimates it to be in the top three festivals in the world for attendance (along with Munich’s Oktoberfest and Rio’s Carnaval). Because we live so close to Lyon, it wasn’t even an option to miss joining the 3-4million people for the big event.

The Chambéry society for the protection of trains (or something to that effect) organized a special train to go direct to and from Lyon on Saturday. What we lost in taking a faster, high speed train, we gained in being able to enjoy the city for about three hours longer than we would have had we taken an SNCF train. Not to mention the other perks: the train was run entirely by elderly train enthusiasts and the Scouts of France, charmingly pronounced “scoots”. These scoots walked through the aisles selling coffee and pastries to raise money for upcoming service trips, while the elderly train enthusiasts punched our tickets with a train-shaped hole punch and sang the SNCF jingle over the loudspeaker to make everyone feel at home.

The festival itself was so much fun. I’ve been in my fair share of ridiculously crowded events (Inauguration 2008, Rally to Restore Sanity, too many Capitol Fourth Concerts to count…) and so I knew that if we tried to see everything we would only end up lost and disappointed. Instead, the four of us – Julia, Hannah, Kevin and I – chose four main attractions to hit and decided that anything else we saw in between would be gravy. The lights were stunning. We saw two main spectacles, one on the Hôtel de Ville and its surrounding buildings and another on the facade of a beautiful church and an enchanting puppet show. It was amazing to see how the light shows interplayed with the architecture to create beautiful illusions and stories. The atmosphere was – dare I say it – electrifying. 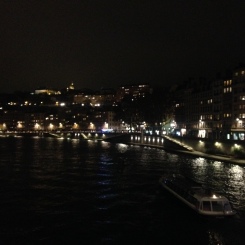 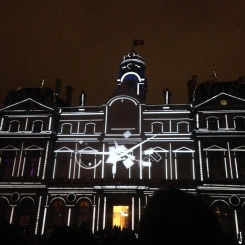 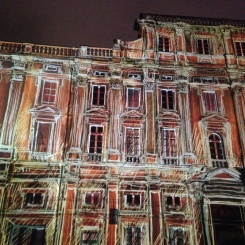 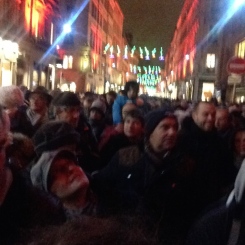 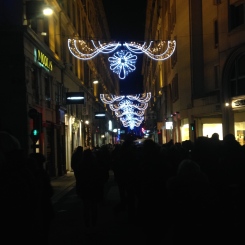 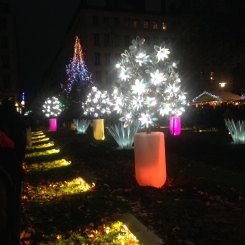 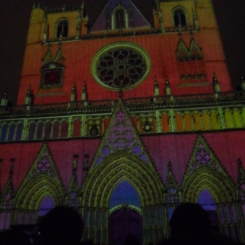 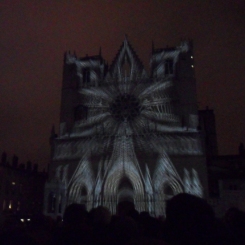 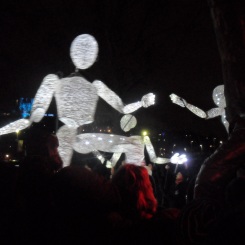 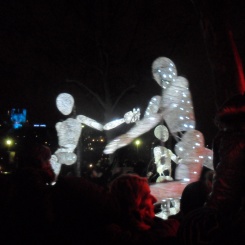 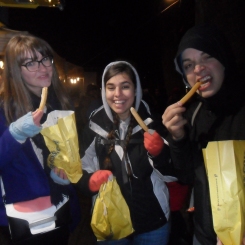 Sadly, my pictures did not turn out very well…turns out a dying iPhone and an old point and shoot don’t do so well with nighttime photos of moving lights. But I did take a fair amount of videos, which I’ll try to upload later, to show you the intensity of these projections!

Despite the revels and merriments of the season, there was one thing that irked me…. Why all this talk about Christmas in a country that claims to be – even prides itself on being laïc, secular? And before you all start lecturing me about how Christmas has been commercialized into a secular holiday, blah blah blah, please take a second to consider the following. As soon as Thanksgiving ended, I was asked to start doing lessons on Christmas vocabulary. I taught words like Santa Claus, reindeer, Christmas tree, etc. In the U.S. around this time, there might be some talk of Santa or presents under the tree, but in my experience we tended to err more towards the “wintery” rather than the “Christmas-y”, focusing on snowman, snowflakes, ice skating. On the other hand, my school has erected a Christmas tree in the lobby and we had a Christmas sing-a-long assembly where classes sang Santa Claus is Coming to Town and The 12 Days of Christmas…

As someone who grew up Catholic, there is nothing about Christmas to me that isn’t in someway intrinsically tied to the religious holiday. And maybe that’s true of the majority of our traditions. Take Santa Claus for example. Many claim that he is a completely secular gift-giver. But does Santa come around and give gifts to the Jews or the Muslims on Christmas? As someone who celebrates Christmas I would say, sure why not. But if I celebrated Hanukkah instead, then I probably would not believe so.

I guess what I’m getting at is, there have been several times when the self-professed laïcité of France has perplexed me. It’s especially difficult watching my good friend (and now roommate!) Hannah try to navigate being Jewish during the weeks of Christmas frenzy. She wasn’t even sure if she would be allowed to talk about Hanukkah in her classes. In my opinion, supporting secularism is so much more than avoiding saying the name Jesus Christ, or forbidding nativity scenes in public spaces. It’s about recognizing that there isn’t only one way to celebrate and to believe, and all religions can and should be respected and appreciated.

And on that note, here are some pictures of the night we spent making latkes and celebrating Hanukkah with Hannah!  ✽ 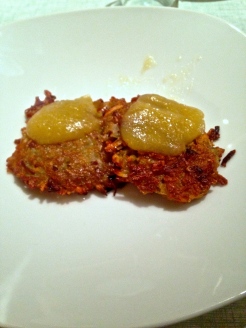 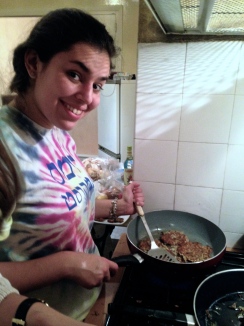 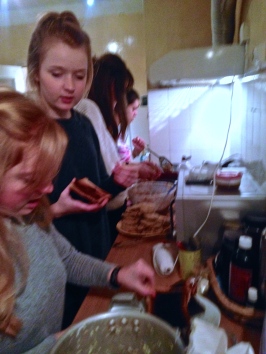 7 thoughts on “All of the Lights: Christmas in “secular” France”