My first days in Chambéry, though thrilling, included probably the most anxiety-filled moments I have ever lived. Why? you ask. How could you possibly be stressed while surrounded by stunning mountain ranges around every corner and all the croissants and éclairs you can eat? Because, dear readers, I was functionally homeless for about two weeks. Add in the fact that pretty much every single administrative task we need to complete requires a justificatif de domicile, or proof of housing, and this limbo status quickly resulted in doing basically nothing that first week except frantically calling and emailing potential landlords, or staring at my computer screen, paralyzed with anxiety (I’m mostly exaggerating…mostly).

France is just full of Catch-22s. For example, you need an address to open a bank account, but some agencies require bank account to rent an apartment. Or, you need an address in order to receive a SIM card (only if you order online. I HIGHLY recommend not doing that and going to the store in person), but it’s nearly impossible to contact landlords or agencies without a French phone number. Or, you are required to have housing insurance to rent an apartment; most banks offer inexpensive insurance plans with your account, but you can’t open an account – yep – without an address. (Although, sidebar: Don’t stress too much about this. Most landlords, particularly if they are particuliers – or private individuals, rather than an agency – may be somewhat lenient if you explain your situation.) I could go on.

I scanned leboncoin.fr, the French version of Craigslist, every day and pretty much emailed every single ad for furnished apartments near the centre ville that had been posted. If there was one I really liked, I would spend half an hour working up the courage to make a foreign-language phone call. Usually, I never heard back. Or I would reach the landlord and they would tell me it had been rented yesterday. Super.

Finally, after days of stress, a move from one Airbnb host to another and sick and tired of living on the 7 outfits I had packed in my carryon but not able to unpack my entire suitcase, I came home to a message in my voicemail from an unknown French number! I understood about 80% of what she said, managed to call back and set a date to visit. Thank heavens for Google Maps because I had absolutely no idea what she said the address was…after asking two times to repeat it, I still only heard sounds…no words. So, I typed in what I thought I heard into Google Maps letter by letter, sound by sound, and lo and behold, the auto-complete function directed me to 5 Place Porte Reine!!

Long story short, the room was available immediately and even though the landlady told me to take the weekend to think about it, I pretty much left knowing that I wanted to sign for it. The apartment was spacious, the room furnished and sunny and did I mention that it was available immediately?! I called her back that afternoon. It’s a 20m2 room in a 5 person colocation, or flat-share. One thing that’s really different here is that it’s possible to have a separate lease for every room in an apartment. Whereas in the US, the entire group signs one lease all at the same time, here it seems to be much more common for landlords to rent the rooms individually whenever they become available. Along with my furnished bedroom, the apartment has a  kitchen and sitting room plus two bathrooms and showers. It’s on the top floor of a long spiral staircase in a very old building that many of my friends have called un chateau! a castle! 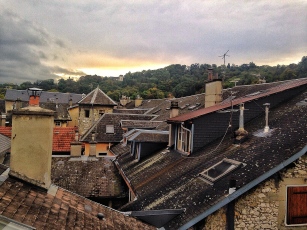 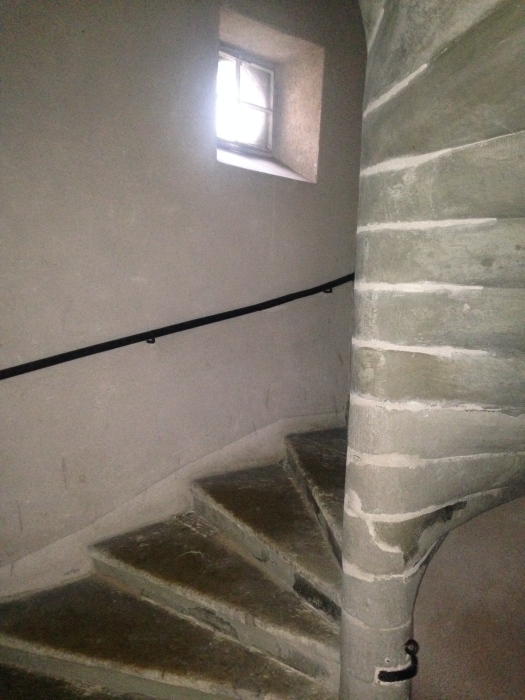 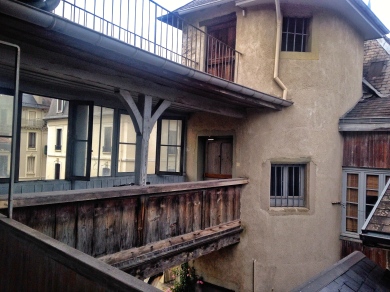 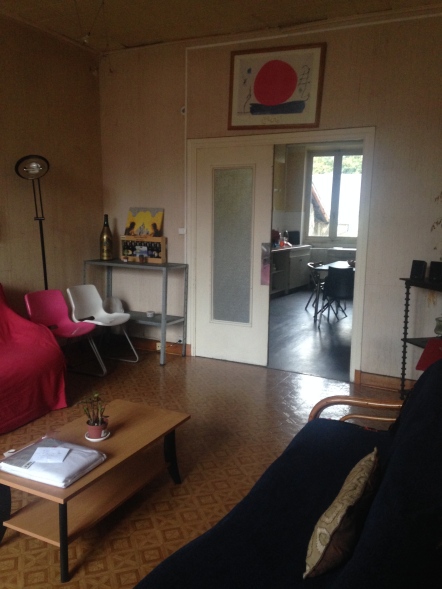 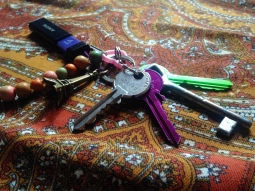 Moving in went more or less smoothly…well, maybe less smoothly than planned. I met the landlady, signed the lease, realized I had only brought enough cash for the security deposit but forgot to also withdraw the first month’s rent. No big deal, we walked over to the bank on the corner. She handed me the keys and that was that. I now had the rest of the day to move in my bags and unpack! I took several trips to move all my luggage, took my time. I decided to meet some friends, mostly because my brain was overheating from so much prolonged stress and even though it was 100% subsiding, I just wanted to go sit somewhere and speak English to people. As I pulled the door shut, I had a thought…I should make sure I have my…yup. I forgot my keys. I am locked out less than one hour after moving in. Thank goodness the landlady had given me the phone number of one of my new roommates who graciously returned to let me in. “Ca arrive!” she told me after I thanked her profusely. “It happens!”

My roommates are all really nice and chill. I think they will be very easy to live with! There’s Manon and Andréa who are friends from the University here. Then Nico who works doing….something. And finally Sandy; I have been told not to expect to ever meet her because she is apparently never here. Okay. Andréa even speaks English very well, so I won’t be totally alone. For now, it seems like everyone tends to keep to themselves a bit, but I’m hoping we’ll become closer friends as time goes on. And, apparently I took the place of a Chinese girl who left behind this note in the bathroom (along with some Chinese toothpaste and a jar of Chinese Skippy peanut butter)…If anyone knows Chinese, I’d love to know what it says.

It is hard to describe the sense of relief the mere unpacking of a suitcase has. The significance of adding four new keys to your key ring which now jingles in your pocket or purse every day. I have been lucky. My search only lasted 15 days. I know people who were searching for 3 weeks. A friend is currently sleeping on my couch because she still hasn’t found anywhere. But the good thing about Limbo is that it can’t last forever.

For any future assistants reading this, (or current assistants still struggling…..) I wish I could give you clearer advice for a worry-free housing search, because goodness knows I could have used some myself, but the best I can tell you is this: It’s going to be hard. It’s going to be terrifying. But you can do it! Absolutely network with other assistants who plan on living nearby before arriving as these could be your potential roommates. Check leboncoin (and other sites like appartager, etc) every day since new postings are made all the time. Calling will get you more responses, but if for whatever reason you can’t call, try to include a French phone number for the landlord to call you back (this is where local or assistant friends can help you!). People don’t seem to like email here…  I also know assistants who chose to go for homestays or student residences; depending on where you’re placed there may be lots of options! Be ruthless, don’t give up, try not to be overly picky, and you will find something!

Here is a list of the websites I used to search, ranked more or less by usefulness.

Have more tips or questions? Leave them in the comments!!  ✽