About a week ago, a great friend of mine from school began her own Grand Tour of Europe and obviously correctly chose Europe’s best city to see first. That’s right everyone, the one and only ANNA McGRADY took Paris by storm!

Anna arrived on a surprisingly sunny Wednesday morning. I went to meet her at the train station, since I didn’t have to be at work until 2:00. Having recently gone through the experience of a bizarre overnight flight to Paris, I thought we could grad a bite to eat, drop Anna off at her hostel and let her sleep away the jet lag. And that’s more or less exactly what we did.

As much as I loved seeing someone from home, I was excited to be a tour guide in a new city! I couldn’t believe how much I was able to tell Anna in terms of tips for transportation, places to see, things to do…But then of course to have a buddy to do some touristy things that I hadn’t had time for yet, like eat some of the famous Berthillon ice cream. It was seriously good ice cream: I had fig and pear and Anna had pear and raspberry rose. The pear was a huge hit, we both could not stop talking about how much it tasted like we were eating the fruit right off the tree (I guess pears grow on trees, right?)! The fig was great, though a little earthy in comparison to the pear. I don’t have a lot of experience with figs yet, but I think I like them! And then the raspberry rose again tasted exactly like what it claimed to be. I had a lick of it and while it was quite the culinary experience, I don’t think I could have eaten a whole scoop. It was just SO flowery.

We also went to the Centre Pompidou, the big museum of contemporary art, well known for its flashy building constructed be “inside out” therefore allowing even more space on the inside. I would like to go back to this museum sometime because I rushed through it, needing to go to work in a few hours and don’t think I really appreciated the art that much. I also had the problem of being way more interested in the actual building itself than any of the art on the walls. Check it out: 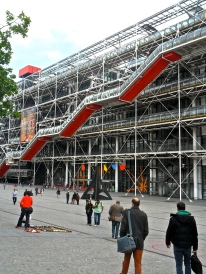 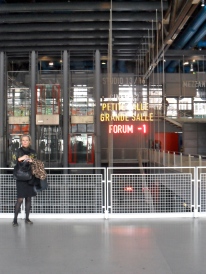 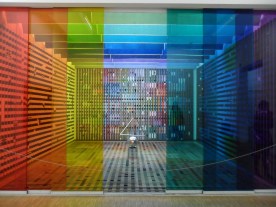 Other crazy things we did: